As previously mentioned, my research into growing Kombucha fabric is very much in its infancy and at the experimental stage.

I have spent the last month or so, exploring subtle variations in the actual growing process and the effect my interaction has on it. I have also been experimenting with the manipulation of the fabric produced. It is important to me to identify its potential and its limitations.

As it takes over 2 weeks to grow a piece of fabric, it can become quite a precious commodity. With each experiment, I can’t help but feel cautious, as I’m conscious it might prove unsuccessful and that’s two weeks’ work gone. Even when things seem to go wrong, maybe not as I’d hoped or expected, I need to remember it’s all part of the learning process. Things would never change if people weren’t prepared to experiment; to try or test new ideas and methods to find out what effect they have.

To explore – to travel through (an unfamiliar area) in order to learn about it: Inquire into; examine: explore every possibility; to look at (something) in a careful way to learn more about it; to study or analyse (something)  http://www.oxforddictionaries.com/definition/english/explore

To experiment – a  test done in order to learn something or…… for the purpose of discovering something unknown http://dictionary.cambridge.org/dictionary/english/experiment

I quickly learned how important it is to record and document everything, yet despite being an organised person and a non-scientist, this proved to be a challenge. However, there is a certain attraction to serendipity and letting things just happen.

Just like working with the sea, I have found growing Kombucha somewhat unpredictable. I have found that trying to recreate a certain effect has proved difficult. Subtleties such as room temperature, light, atmosphere, different types of sugar, vinegar and tea, all have an effect on the grown fabric.

After many trials and research I have come to the conclusion that Kombucha needs the specific combination of tea, sugar, vinegar + a starter culture of microorganisms in order to grow.

I have learned that the longer the Kombucha is left to grow, the thicker the fabric is, presuming there still remains enough sugary tea solution to feed it. I’ve also learned that black tea produces a darker fabric and extra amounts of sugar don’t seem to impact on the speed of growth, as I originally thought it would. Heat also tends to darken the Kombucha whether in the growing or drying process. If the heat is too intense whilst the fabric is growing the water evaporates too quickly, leaving a sticky toffee solution. At times this has been a love-hate relationship! 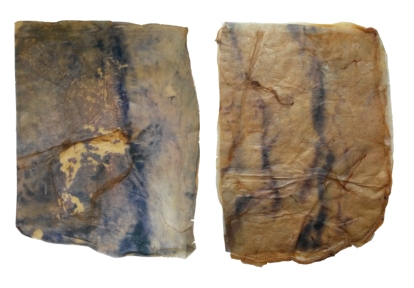 Once the fabric is harvested I have been exploring its materiality and what I can do with it through stitch, wax, natural dyeing, image transfer and layering. It’s intriguing how different textures can be created during the drying process dependent on the surface it dries upon.

As soon as I started experimenting I realised I was just at the beginning of a massive journey of discovery. There is so much to try yet there doesn’t seem enough hours in a day. It’s unclear at this stage where my experimentation will lead. Although this is an exciting period, it is also very scary when there are time deadlines to meet and unsettling with respect to my MA exhibition next October, when I have no idea yet of the outcomes.

But perhaps fear is a good thing. As Maslow (1969) stated…..one can choose to go back to safety or forward toward growth. Growth must be chosen again and again; fear must be overcome again and again.

I am mindful of where my research began, with the dynamics of the sea and its erosion on surfaces and sub surfaces. With the Kombucha, I want to translate change and transformation over time. Just as the sea manages to erode, displace, transform, conceal, reveal and migrate things…I am conscious of this whe

n exploring and experimenting with the Kombucha, perhaps leaving traces behind in the process.

I plan to continue with the exploratory experimental work, adding materials to the growing process and manipulating the drying process. I want to see how adding things such as salt, natural materials and heavy metal impact on the Kombucha and whether it continues to grow around objects.

In some of my experiments, I was quite intrigued by the salt crystal growth on the Kombucha fabric and so I also intend to explore this further.

I hope you’ll stay with me through the next stage of the journey….

4 thoughts on “The Learning Curve is a Spiral”