Continuing with my exploratory work of growing Kombucha fabric, I wanted to take my ‘grown’ fabric to where my ideas originated (i.e. back to the sea) to find out what impact seawater might have on it.

To maintain some control over the level and duration of submersion, I chose to bring the seawater back into my studio, so I could monitor any impact closely. Despite leaving the Kombucha fabric submerged for a couple of weeks in the seawater, no significant visible change seemed to be apparent.

This prompted me to create my own concentrated saline solution. As there are on average 35g of salt in every litre of seawater (and this had no visible effect on the fabric), I wanted to increase the strength substantially to see what effect this might have.

After a meeting with Dr. Susan Hilda Jones at UCLAN to discuss different methods of salt crystal growth, I became quite systematic and methodical in my approach, wanting to explore as many avenues as possible.

I chose to trial my experiments at different temperatures and experimented with the use of a heat mat. I also wanted to try different types of salt to see the effect. The 3 main issues I had to consider were – saturation, temperature and method.

I understood that any normal type of fabric positioned beneath the water level probably would start to grow crystals. I explored different methods of applying the saline solution through dipping, spreading, spraying, painting and dripping.

It was trial and error to begin with as I experimented with different strengths of saline solution, different salts, temperatures and methods.

I was soon learning that (just like the growing of Kombucha), I was now working with yet another unpredictable process with inconsistent results but to be honest I found that quite exciting.

I expected there to be irregularities related to the variable room temperature, position and spread of temperature across the heat mat.

I found that any Kombucha fabric in close proximity to the heat mat or stood for a prolonged period on the heat mat darkened in colour.

There were some fascinating and intriguing results. Crystals were variable in shape and size. Some were cuboid and some were spiky. There were individual crystals; crystals forming clumps and layers, crystals growing on top of other crystals, some with holes in and some without. 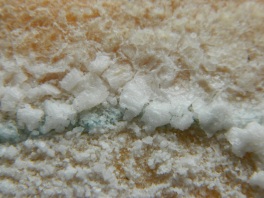 I was intrigued by a faint green line present on some of my samples but I can only speculate this might be due to the copper from the water pipes, chlorine in the tap water, bacteria in the air or perhaps certain elements within the salt itself.

Once the water was completely saturated with salt, it didn’t seem to make any difference to the rate of crystal growth whether there was 40gms or 90gms in a 150ml sample.

I found that any experiments left for a very long time, not only coated the fabric in salt crystals, with crystals duplicating on top of each other but also they started to spread and grew across the surface of the water,  resembling ice.

I’ve admired the work of Debbie Lyddon http://debbielyddon.co.uk since I saw her Blue Salt Pots at the Upfront Gallery, Penrith in March 2015. Interestingly she too draws inspiration from natural phenomena and changes that occur in a coastal environment. I can relate to her statement that Air, wind, water, light and sound are forever shifting with continuous and infinitesimal change; my work explores these visible and invisible forces and the transformations they engender on the landscape and the objects in it.

In my research I also came across Tacita Dean’s The Book End of Time (2013) where her interest in time and fascination with Robert Smithson’s spiral jetty and Ballard’s book The Voices of Time culminated in a film alongside a number of photographs, one of which was of this salt encrusted book.

When I grow the Kombucha fabric, there are many transformations taking place over time, both during it’s growing period and when it’s drying. Similarly, the salt crystals are ever-changing from conception through the different stages of growth. With both the Kombucha and the salt crystals I see echoes of the sea’s erosion and construction.

I began to group together my samples and sequences started appearing.

I am intrigued by the edge where the salt crystals fade into the fabric. Do we read them as disappearing or appearing? The continuous flow created by the edges is almost like the tide lapping at the shore. 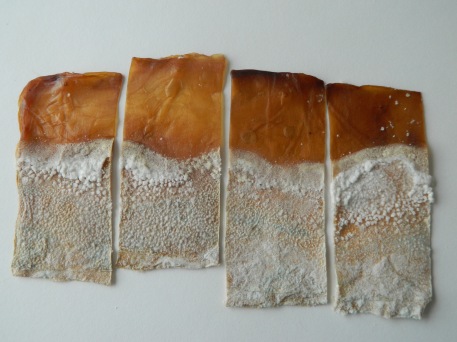 I like the inherent fragility and preciousness the salt crystals have, the organic nature and the tactility. The way the crystals not only sit on the surface but also seem to penetrate the fabric.

Interestingly, once you have an image in your head, it starts to take over your life and you start to look for that image everywhere you go, almost as an obsession. Whilst walking alongside the shore recently, I was very conscious of the subtle and continuous sound of the water ceaselessly licking the coast  (Foley 1994:27). It is this very gentle, almost invisible erosive action I am trying to translate through my work. Follow me in my search for this translation.

Just as an afterthought – I was pleased to be invited recently to exhibit four of my prints relating to sequences, in an exhibition at The Dukes in Lancaster. The exhibition is on display now until 4 June 2016. I hope you get to see them. This is one of my prints. 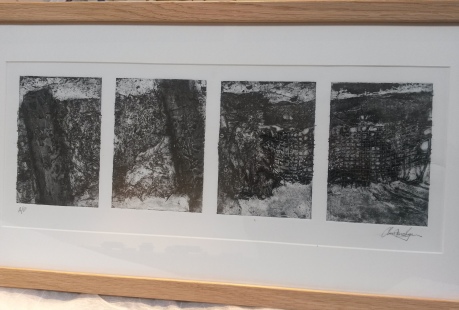 9 thoughts on “Taking things back to the sea”