I recently visited Edinburgh to see the British Art Show 8. I was captivated by the large-scale Sea Paintings by Jessica Warboys, which were made directly on the beach with the sea as her collaborator. She distributed pigment onto sea soaked canvases allowing the waves and the wind to determine the impression left by the paint. Although I’ve been exploring similar ideas, I was drawn to the scale of her paintings. It was partly this that encouraged me to increase the scale of my Kombucha fabric growing.

Wanting to push the limitations of the Kombucha fabric and gain further knowledge and understanding, I set out to investigate whether increasing the scale would have any impact on the physical properties and aesthetic qualities of it.

To scale up my standard recipe and increase the quantities, I got in touch with a number of suppliers to see if they would consider donating any materials by way of sponsoring the research project. I was surprised yet appreciative that some suppliers saw potential in the project and agreed to donate. I learned that many suppliers only support charities, so I was humbled by the generosity of them.

I wanted to find out whether increasing the scale impacted on the time the fabric needed to grow. I questioned whether the impact of scaling everything up would change the physical properties of the fabric but also whether the aesthetics would alter in any way. Would the fabric maintain its fragility and translucent qualities that interest me? 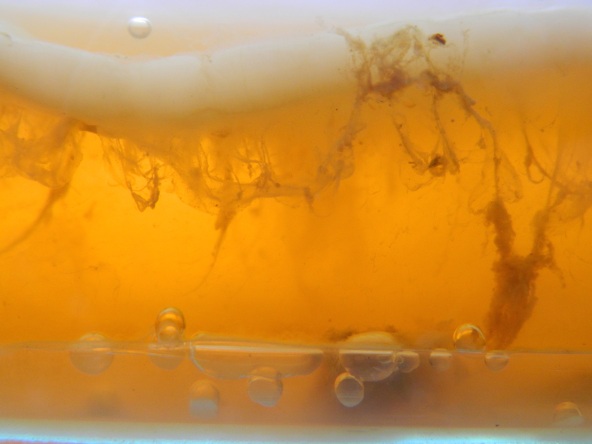 It wasn’t long before many issues and challenges presented themselves that hadn’t surfaced on a smaller scale. I soon realised that increasing the number of Kombucha scobies was not a good move. The liquid became over active, resulting in many fermentation bubbles and subsequent large air pockets in the fabric. Where there is an air pocket, the fabric pauses in its growth, creating inconsistencies in the thickness of the fabric.

In addition, the scobies would stick themselves to the underside of the growing fabric. On a small scale if this ever happened, it didn’t seem an issue but on a larger scale it was particularly noticeable and again created inconsistencies and holes.

Although I wasn’t too upset by this, as I was working with a living, ever-changing, unpredictable material, I did want to strive for consistency and perfect the thickness before considering whether I wanted any variation to this.

Research led me to try and weigh down the scobies in order to gain consistency but my research didn’t offer any solutions as to what to use that would not contaminate the liquid.

I tried wrapping pebbles in cling film and placing them carefully on top of the scobies. The over active liquid soon unwrapped the cling film leaving the pebbles on their own. Unfortunately one of the pebbles probably contained hematite and subsequently disintegrated, contaminating the whole bath of liquid. Presumably the acid of the vinegar reacted with the iron content. I’m now using solid glass pieces to weigh down the scobies, courtesy of the science department!

Controlling and maintaining an ambient temperature proved to be a challenge when storing the live large baths. I suspect any inconsistency in temperature would also contribute to the overactivity of the scobies. I would often lie awake at night having visions of the overactive Kombucha liquid bubbling away violently in the studio, with a life of its own and pouring over the sides of the baths and covering the studio floor! Managing the larger sheets of wet harvested fabric was a learning episode in itself. If it was too thin, it was too fragile to handle; too thick and it became too heavy and slippery.

I am learning a lot about growing the Kombucha fabric large scale but not yet producing the results I had anticipated. The scale issue is far from resolved but my tenacious personality helps to persevere with it for the time being.

In the meantime, alongside this large scale exploration, I am continuing to explore the Kombucha on a smaller scale through stitch, manipulation of the surface and using the fabric as a substrate for image and text transfer, including trying cyanotype printing on it. I have also been exploring whether it will grow over and around objects.

Whilst I was in Edinburgh I visited a remarkable and thought provoking exhibition Bio and Beyond, part of Edinburgh’s International Science Festival. One section of this exhibition was Menagerie of Microbes co–curated by ASCUS http://www.ascus.org.uk and Heather Barnett. The exhibition brought together the work of artists, designers and scientists who shared a passion for microorganisms, which exist in and around us.

I was particular drawn to this statement in the exhibition: As we go about our daily business we are surrounded by vast colonies of microorganisms, thriving communities existing largely out of sight. They may be small, yet in terms of impact and numbers, they represent the predominate form of life on earth.

The idea of things being out of sight and going unnoticed is one notion I am trying to capture.

This intrigued me and led me to investigate microscopic imagery of samples of my grown Kombucha fabric and also the salt crystals formed on the fabric. I found it fascinating that an optical microscope camera can photograph things you can see but a Scanning Electron Microscope (SEM) can photograph what you can’t see.

I was blown away with the imagery. I can see there is much potential here.

6 thoughts on “Does Size Matter?”