I have always been interested in the physicality of making, working intuitively with materials, so I thought it was time I ventured back to using fabric again, as recently my practice has been dominated by drawing, printmaking and photography.

I created this textile sequence some time ago based on coastal imagery and rising sea levels.

Looking at it on my studio wall inspired me to create another, only this time incorporating a bit of my home grown Kombucha fabric made from micro-organisms. Although this work isn’t earth shattering, it’s the start I needed to get me back working with fabrics again.

I’m conscious that sequences keep emerging in my work. I like the idea of a set of related items that follow each other in a particular order. In looking at the definition of what a ‘sequence’  is, I was intrigued to question whether in their creation, do I  combine things in a particular order or do I discover the order in which they are combined!

In trying to unpick how I work and how I start to create these textile sequences,  I know I work instinctively focussing on the inherent qualities of the fabric…whether it’s something related to the edge, the fibres, texture or colour. I tend to have an underlying concept in mind and through exploring variations, decision making is improvisational and relies on feeling, response and adjustment. (1)

I liked the emphasis of time in the definition…Sequence – a following of one thing after another in time… serial arrangement in which things follow in logical order,  although I would question whether there is much logic taking place. Through a process of thinking on my feet, I believe new understandings are created in the moment. Theorist Michael Polanyi (1983) believed that we can make informed guesses and act on hunches in an informal and unquantifiable way, which he refers to as ‘tacit knowledge’ (2) that cannot easily be described or expressed in language. I agree that this idea of knowing more than we can say, sometimes goes hand in hand with a more conscious approach to what we are doing. We may not be able to articulate why we do or think something, we just know.

I remember from an exhibition some years ago, I found the philosophy and approach of practitioner Jane Rushton (2010) inspiring. In speaking about her experimentation being central to her process, images are found through testing, manipulating, and saying what if? (3). I do tend to use this approach across my practice and ask myself what would happen if I do this?…move this?…layer this?…change that?

Remembering back to my involvement in Alice Kettle’s Stitch a Tree project, I really enjoyed the stitching aspect of these sequences and found the whole stitching process relaxing and contemplative. In Claire Wellesley Smith’s book Slow Stitch (4) she makes the observation that

The speed of life in the 21stcentury can be overwhelming but taking a calmer, more measured approach to the creative process can help you find new joy in the experience of making.

Although I often tend to work fast, normally in bursts, I think it’s good to stop and change pace. As Claire Wellesley Smith suggests it’s all about balance and finding the right speed. I know when I’m drawing, I want to get things down as quickly as possible to try and capture the essence and atmosphere of a place. I work with a burst of energy to translate and capture what I feel, see and sense. Even though we might initially be oblivious to things changing, time does not stand still and within minutes, seconds even, what I’m trying to capture has already changed.

Stitching however, particularly by hand requires a slower pace. I find it’s a process that involves contemplation, space for thinking and being in the moment both with the stitching but also with my surroundings. I’m fortunate living in a rural place where sounds of nature are at their best. Taking time to stitch allows the senses to tune in to the many surrounding sounds. The faint scratching of a wasp along the wooden arm of the garden seat, the blackbird foraging in the hedgerow, the cacophony of bird sounds and the whispering sound of the wind in the birch trees . I came across the word ‘Psithurism’ the other day, meaning the sound of the wind in the trees. It comes from the Greek word psithuros, which means whispering. The naturalist author and founding member of the RSPB, W.H. Hudson, suggests in Birds and Man (1901), that psithurism is salubrious. He describes the sound of wind in the trees as “very restorative” – a mysterious voice which the forest speaks to us, and that to lie or sit thus for an hour at a time listening to the wind is an experience worth going far to seek. I find that sitting stitching helps connect me to the environment, as does walking and drawing. Every stitch is a mark in time and every stitch marks time.

Despite my efforts to work with fabric, I couldn’t resist the urge to create some sequences in print. These are created using simple aluminium silver foil board, again based on coastal imagery. 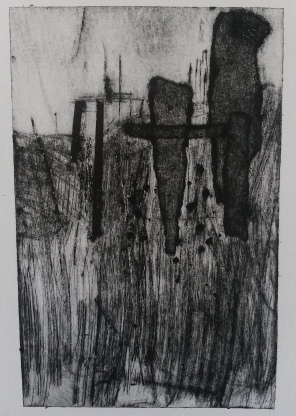 I’ve mentioned previously that once I have an image in my head, I tend to see it everywhere, not only within other artists’ work but also within the environment.

Lubaina Himid’s ‘Metal Sea Paintings’  were made specially for the exhibition Invisibles Narratives  that  I managed to get to see at the Newlyn Gallery in Cornwall, investigating place, space and time. Whilst in Cornwall, in the  picturesque fishing port of Mousehole, I also saw these marvellous set of shutters, which I feel are works of art in their own right!